Hive is an attempt to bring the method of communication used by bees into a space and realm that is comprehensible to human beings. Bees communicate the locations of flowers primarily through dance and movement. Using proximity sensors, LEDs, projection mapped imagery, and sound, Hive seeks to allow the audience to use their presence in the space to alter the imagery and sound in the space. Certain patterns of animation and lighting emerge as the viewers position themselves and move around the space.

Hive builds of the artist’s nature and insect photographic work compiled over the last 15 years in northern California. The installation consists of 4 parts: a mandala lightbox, a sensor, a projection mapped animation, and sound. When sensors detect viewers in the space, the LED animations in the lightbox change and a soft bee buzz recording is played through the speakers, and this sound in turn alters the imagery of the projection map installation overhead. 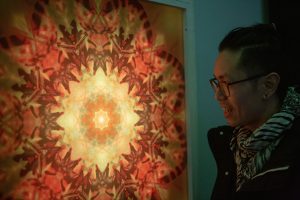 Projection mapping is created with GarageCube’s Modul8, with TouchOSC controls. LEDs are NeoPixel from Adafruit and driven by an Arduino Mega. Mandala image printed on eXposer from Bay Photo. All images and hand painted screen created by stevepi.

Hive was shown at the Gray Area’s Showcase in December 2018.